Our adventures, now together, through the northern part of the North Island of New Zealand were endless. I first arrived in New Zealand on my own, unsure of exactly what was going to unfold between us when distance was in place and not a mere thought that we could optimistically conquer. I filled my time with my new job and some adventuring out on my own.

On my own I succumbed to the cover charge and explored Hobbiton, one of the few locations in New Zealand where Lord of the Rings was filmed. We were in a large group as we toured, which isn’t my favorite, but it was still quite fun and the scenery absolutely majestic. With tiny little hobbit houses and gardens that would make any green thumb drool, it was well worth the day and cover. 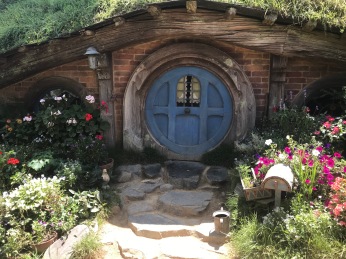 Though I had plenty to do to pass time, I felt relieved when my new love finally arrived. Now it was my turn to get off by two in the afternoon and take him around to explore of one of my favorite places on earth. We explored every part of Tauranga and the Bay of Plenty as we could, and stayed in a cute cottage on and avocado farm set up in the hills, overlooking the city and bay. We had dinners with dear friends and hiked Mount Manganui multiple times. We squeezed in as much quality fun as we could.

Together we explored daily and weekends were even better, as we could escape for a few days to explore even further away. New Zealand possesses a countless number of pristine lakes and many of them completely swimmable. We endlessly explored waterfalls and trails that led to lakes just waiting for us to jump into. 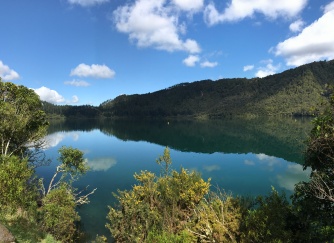 One of the most worth it weekend trips in this part of New Zealand is the Coromandel peninsula. With hikes leading to several cove beaches and shores home to small towns, it is an ideal trek for a few days. We were finally back together, and in a beautiful waterfall garden just outside Auckland, he got down on one knee. Hand in hand we were now headed out to adventure together.

One Reply to “New Zealand Adventures Together”